Who deserves your trust in the environment debate?

Who can be trusted in the environment debate? Many people want to live their life as good as possible when it comes to sustainability and the environment. But who and what information can we trust? Why do we get contradictory information? What hides behind the headlines in the newspapers? Scientists and their studies claim to have come up with the truth. The next day another study show a different reality. Have you recognised this? I am sure you have. We will dig into that. 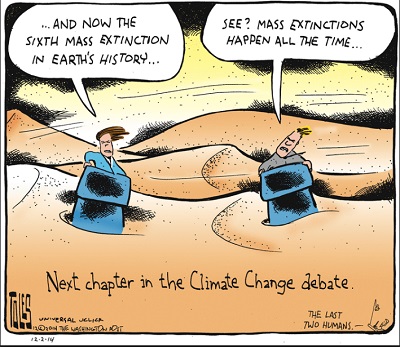 First of all we need to identify who the debate will affect. The stakeholders. Why is an oil company´s opinion different than an environmental organisations? Is there more than one truth?

Many people you meet has an opinion about the climate and other environmental matters. Some people also feel forced to have an opinion. But where do these opinions come from? Where is the origin of the facts that shape our opinions? There are many stakeholders involved. All of them are trying to get their message out. There is a lot of money involved so all stakeholders are competing about the media space. This are some of the stakeholders:

This is why the environment debate is important to a company

Most companies drive force is money. They have a responsibility to give shareholders return on their investments. For many of them it is not a top priority to make the world a better place to live or giving nature time to heal. Over-consumption is not good for the environment. Organic products need more market shares than conventional products in order to recover.

All manufacturing takes something from the nature and sometimes without giving anything back. This will not work in the long run, a change is necessary. An irresponsible company want as little discussion on environment questions as possible. They want to work in the dark and benefit from nature.

It should be mandatory for companies to climate compensate and take the responsibility for their own emissions. This is far from the case today because it would reduce the profit. There are many reasons to believe that a company that can convert to a more environmental friendly manufacturing and supply chain are more likely to have a successful future.

“Earth provides enough to satisfy every man’s needs, but not every man’s greed.”
― Mahatma Gandhi

This is why the environment debate is important to politicians

In a democracy the people choose who they want to represent them and their opinions in the parliament. This is a known fact by most people. It is also very known that they are called politicians. When you vote it is usually some kind of negotiation with your conscious. Not all parties or politicians fits your taste hundred percent. Also it can be though to choose  between voting by ideology or what gives you most money in your pocket. 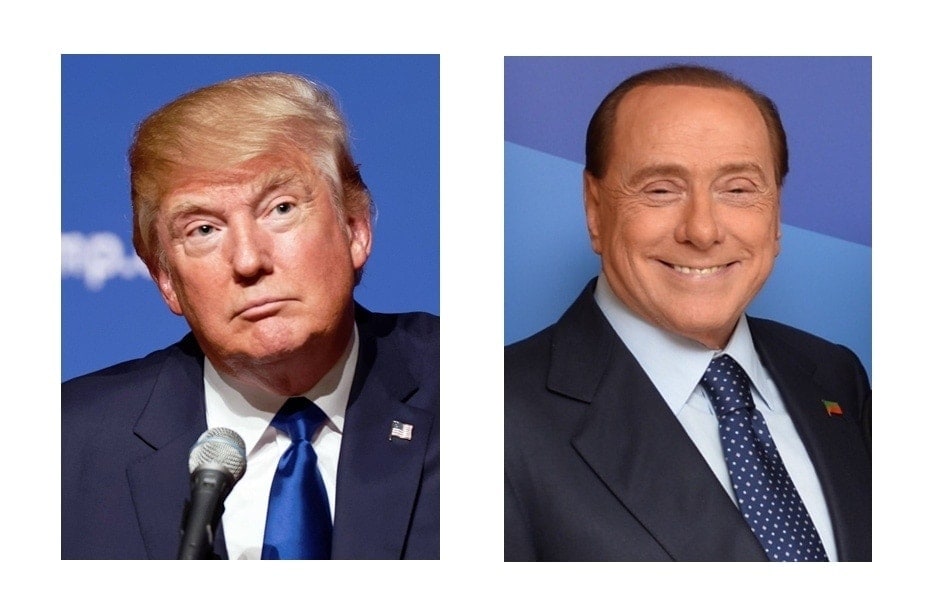 Our protectors of the environment?

So why doesn’t politicians do more for the environment?

The short answer is that they want to be popular and be voted for again. They need to target large groups of people, the voters. As a comparison to another field like marketing this would mean death. If a marketing manager want to target all people he will most likely loose them all. To target some customers and also ignore some customer groups is necessary because the product is not for all. A politician on the other hand need to target larger groups of people than a company in order to get into the parliament and also having the majority of the votes. The marketing manager most likely are happy with just a few percent of the people.

The point with this reasoning is that a politician cannot afford to become unpopular by saying things that may upset the voters. To reform the environmental agenda would challenge the popularity in the way that we would need to change our way of thinking, shopping and acting. This is a high risk for for a politician even if it turned out to be a good idea after some years. Decisions that have a positive impact in the future can have a negative impact on the present financials. This leads to short-term decisions.  A politician need to have courage in order to raise environmental questions.

This is why the environment debate is important to scientists

All scientific research need to be funded. Someone always have to pay the bills. This can be made by companies, foundations, universities or governments. A scientific study can actually be bought by anyone with money. This can create a problem. How objective will that report be when, as an example, an oil company buy a study about the oil industries impact on the environment? Another example would be that a sugar company order a study about possible relations between sugar and health. I´ts obvious that this causes problems and angled conclusions.

Without funding – No research. So in a debate a scientist may feel forced to not report the whole truth because of the relation between him and the founder.

Is there any environmental organisation out there that are trustworthy? Honestly, I have no clue. But since many of them send messages that are aligned with my own beliefs I choose to believe many of them. It´s like religion, you choose the one that fits your needs and beliefs.

This is why the environment debate is important to the Media

The Medias are also companies that are applicable in the company categorie. They need to have readers in order to make money. Without readers they cannot charge for the advertisement. The more readers the more money. Its easy to understand why they are screaming out spectacular headlines. It sells. It´s also common that newspapers are connected to a political party. Therefore the information in those newspapers are angled to support the political party.

In social media it is more or less the same. They need content that interacts. Social media also sell advertisements and are interested in new interesting content that attract more readers. Media will sell better if the content is scary or spectacular. That´s why the word catastrophe is now used for almost any situation.

“The word catastrophe is now used for almost any situation”

There are many examples of fake news out there in cyber space. An example is the recent French election where fake news was spread just before the election day. It was not time enough to comment or to meet the accusations before the election was over. So fake news are certainly a threat to democracy. A special vigilance is a good advice especially before elections.

“According to our historical content analysis platform, NewsWhip Analytics, nearly 40 percent of the most-shared stories in the lead up to the U.S. election came from fake news sources — 72 of the top 200 stories. Newswhip.com

This is why the environment debate is important to people

People are of course also company owners, politicians and member of an environmental organisation, but the majority are not. Sometimes the people are referred to as the big grey mass. But how grey are they?

The technology by today spread news and information very quickly. One bad act and you can be gone as a company. Usually this also goes for politicians, but recent events has proved that this might be wrong. But for the people to be powerful they need to have knowledge. They should bear in mind that who is telling me this fact? What´s on that persons agenda? Be critical to the origin of studies and reports. The environmental debate is crucial for the people since the majority get the information from it.

The environment debate is for the poor people

A disturbing fact is that the poorest people also get affected the most from a bad environment. Rich countries and companies exploit and take advantage of poorer nations. Its not the rich people that do the dangerous jobs within the chemical industry as an example.

“People who are socially, economically, culturally, politically, institutionally or otherwise marginalised are especially vulnerable to climate change.” The Guardian

This is why the environment debate is important to the nature

Because the air, the water and the land are being poisoned. Mother Nature doesn’t feel good at the moment. She is a survivor and usually heals but she will need time to recover from this illness. For her sake we all need cooperate in the healing process. Seriously, would we treat our children the way we treat our nature?

Which of the stakeholders has the greatest influence on the debate?

The below charts are just an example based on guessing from the author. No science involved. (A freedom a blog author has) Do you agree? What is your opinion? 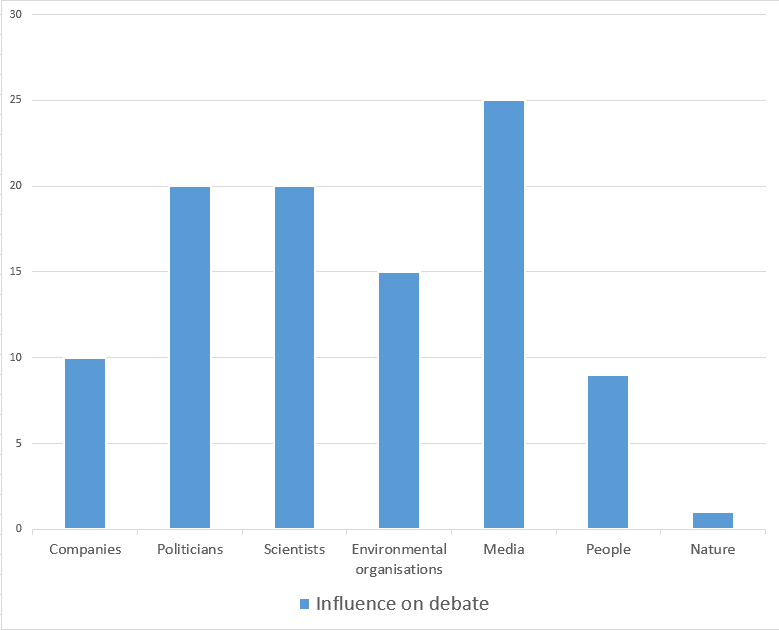 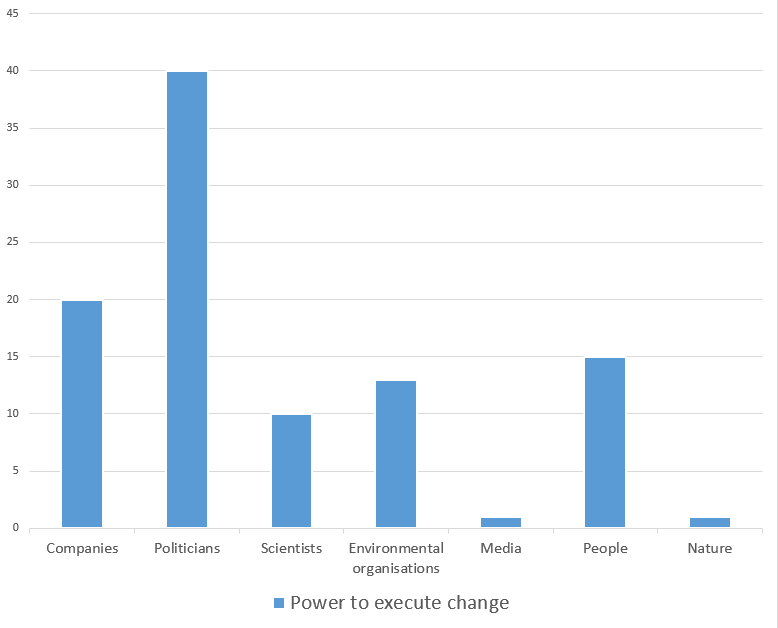 This is why we get contradictory information

Every stakeholder has its own agenda and want the environment debate to favour them. This is why the information can be very confusing. Is there a climate threat or not? Should I separate my garbage or is it just waste of time? To have knowledge about why there are conflicting information out there is one of the keys to make up your own mind. Try to get as close as possible to the true facts. Separating the propaganda from what is real.

What is this authors agenda?

What is my role in the debate you wonder? I want people to read this and get concerned about the environmental situation. Also I want them to find our organic clothes and find out that we are company that care about the planets well being and therefore buy our clothes. That is my intention. I also love the nature and want to protect it, for us and for future generations. Do I have a hidden agenda? How can you be sure?

We are flooded with information that we need to sort and decide if its true or not. Ask the question yourself; who is writhing this and why? Who paid the study that you just read?

Everyone has an agenda. Try to make your opinion really yours and no one else. With the threat of fake news it gets more and more important to filter the information before we make up our minds. Be critical and always check the source of the information.

If you believe that nature needs support try to influence the influencers and put pressure on your local politician. Spread the word…

One thought on “Environment debate – Who can you trust?”